From Old School RuneScape Wiki
Jump to: navigation, search
The RuneScape Wiki also has an article on: rsw:Bob
Not to be confused with Evil Bob.
Bob 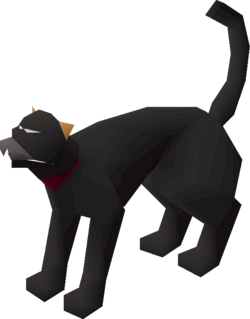 Bob the Jagex cat is an enigmatic black cat and reincarnation of the ancient hero Robert the Strong. He travels the world of Gielinor with his girlfriend, Neite, although he generally returns to his human Unferth's house every week. Like all cats, his speech can only be understood through the use of the catspeak amulet.

As Bob likes to wander the world, he has one of the largest wander radius of all NPCs in the game, spawning in his human Unferth's house in Burthorpe every time there is a system update, but after which he is able to wander anywhere that is not restricted by physical boundaries, being able to wander to far away places such as Edgeville and Port Sarim. It is possible to locate Bob by using the catspeak amulet after it is enchanted in A Tail of Two Cats which, when operated, will open a menu that looks like a cat's face. By clicking on the whiskers, the dial will rotate. When the eyes light up and a cat meowing sound is heard, Bob can be found in the direction that the dial is pointing.

As the reincarnation of the hero Robert the Strong, Robert's memories as a human were locked away. Bob's earliest memories was that of a kitten, and that he was raised by Gertrude. Eventually, he came into the care of Unferth, though Bob often wandered around the world for days, worrying his owner endlessly.

During A Tail of Two Cats, Unferth asks an adventurer to help him find Bob, as he had not come back for longer than expected, worrying him greatly. The adventurer, with their cat and Hild, were able to locate Bob. When found, Bob tells the adventurer that he is trying to get the attention of another cat named Neite, who is uninterested in him because she does not know about his past. Bob is later convinced that he is Robert the Strong, but he is unsure because he has no memories. The adventurer and their cat head to Sophanem to get the Sphinx's help, who reveals that Bob is actually Robert the Strong. Neite, who the Sphinx also teleported to Sophanem, falls in love with Bob and the two go on a journey across Gielinor. Bob gives the adventurer some chores for Unferth to do.

Later on in Dragon Slayer II, the adventurer finds Bob and attempts to convince him that he is Robert the Strong. Bob doesn't remember anything, and the Sphinx is unable to help. However, the adventurer soon remembers the Oneiromancer, who gives them the dream vial. The adventurer makes the potion again, and they enter Bob's Dream World. After beating a dream guardian of his human form, Bob then remembers everything as Robert the Strong and helps the player in finding the dragon key pieces that were hidden all over the world.

Bob told the adventurer that he had personally hidden two of the key pieces; one in an abandoned Dragonkin fortress north of Rellekka, and another on the southern shores of Karamja. He also entrusted two of the key pieces to his fellow heroes Camorra and Tristan. Camorra went to the far west, while Bob assumed that Tristan's family was still in Varrock. He warned them that he did not feel comfortable with opening the Vault, and that they should do so at their own risk.

After the player reforges the key, they enter the Vault and find a dragon incubating in a large pool. Zorgoth, a Dragonkin, approached the trio, and Bob immediately recognised him. Zorgoth also recognised Bob as a result, and remarked on how he turned into a cat. The two argued over who was right and wrong, before Zorgoth called for Galvek. Bob narrowly avoided being incinerated by Galvek, as the adventurer grabbed him and ran. He later attended a meeting with the human leaders, and told the adventurer that the war wouldn't be over until Zorgoth was killed. He noted that if Galvek was killed, Zorgoth would be too. While incapable of fighting, Bob insisted on coming along with the assault force.

When the adventurer eventually arrived at the fleet's grand ship, Bob informed them of the situation. After disposing of the dragons on the ship, Zorgoth and Galvek arrived. Galvek killed four Varrockian guards, before focusing its attention on the adventurer. The adventurer jumped out of the way to avoid its dragonfire, and Bob, who was right behind the adventurer, was incinerated as a result. This enraged them, and they eventually killed Galvek and Zorgoth. What was left of Bob was later buried across Unferth's house. Both Unferth and Neite were distraught over his death.