Bone Voyage is a quest about the construction of a barge for the Varrock museum. The quest unlocks Fossil Island, which is of archaeological interest to the museum Curator Haig Halen.

{"requirements":"*100 [[Kudos]]\n*Completion of the following quest:\n**[[The Dig Site]]","desc":"Curator Haig Halen needs your help to finish the construction of a barge fit to take the Varrock museum crew to an unexplored landmass to the east. There have been many attempts to reach the island, but none were successful.\n\nThis quest will have you venturing across Gielinor, aiding the Varrock museum and making the success of the voyage a possibility.","difficulty":"Intermediate","kills":"None","name":"Bone Voyage","start":"Talk to [[Curator Haig Halen]] in the [[Varrock Museum]].","length":"Short","items":"* 2 [[vodka]]\n*[[Marrentill potion (unf)]]"} 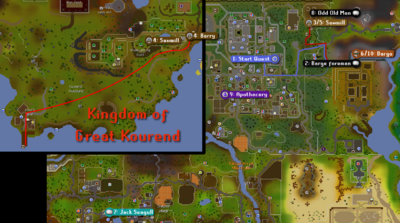 Talk to Curator Haig Halen at the Varrock Museum. Ask if he has any interesting news. He will tell you that they have found an interesting island north of Morytania, and that they believe it may be of archaeological significance. They are in the process of making the final preparations for the voyage, and he has recommended you talk to the barge foreman, who has requested the aid of a qualified and experienced adventurer. Agree to help, and make your way to the Digsite.

Head to the canal barge north of the Digsite. There, speak to the barge foreman in front of the barge. They are in the final stages of preparation, but there are a few minor adjustments he'd like to make to the barge before getting the crew ready. He requires a sturdier type of wood to keep the barge afloat; magic logs will not do, since they had peculiar side effects (which you will learn later). He will require a high-grade wood found only in the distant Western lands - redwood.

The barge foreman will instruct the player to talk to the Sawmill operator at the Sawmill north-west from the barge.

Travel to the Lumber Yard and speak to the Sawmill operator. In order to obtain redwood planks, he has arranged a fairly generous deal between himself and the sawmill in Great Kourend's Woodcutting Guild. He will give you a sawmill proposal, which you will have to deliver to the Woodcutting Guild.

Return to the Varrock Sawmill operator, and give him the sawmill agreement. 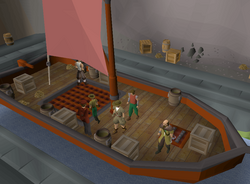 Thus, he will believe the voyage is cursed, and will refuse to sail unless you can ensure the safety of the crew from this curse. He asks you to talk to some experienced sailors in the Rusty Anchor Inn in Port Sarim.

Teleport and go to the Rusty Anchor Inn in Port Sarim using an Amulet of Glory (Draynor), Rimmington house teleport, or the Rat Pits Minigame teleport. Talk to Jack Seagull in the Rusty Anchor Inn, and ask him if he has ever made any cursed voyages. He will claim that you need a lucky bone charm, and that you should speak to the Odd Old Man in Silvarea to get one. Ahab will interrupt, claiming that a 'potion of sealegs' will have you sail the voyage unscathed. You decide that you'll ask the navigators which one they'll prefer to have.

Return to the Lead Navigator. He will want the potion of sealegs, but the Junior Navigator wants the bone charm instead.

Visit the Odd Old Man (the rag and bone man) by the Silvarea mine, north of the Digsite, and ask for a lucky charm. Tell him that you're making a cursed voyage to receive the bone charm.

Speak to the Apothecary in Varrock south-west of Varrock Square (you will need to select "Talk about something else"). He will require a marrentill potion (unf) and two bottles of vodka. Speak to him again to receive the potion of sealegs. 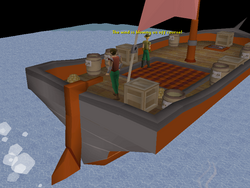 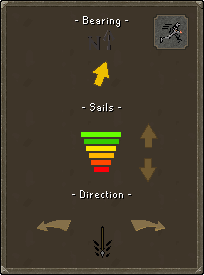 Unsurprisingly, the potion has made everyone except the Junior Navigator pass out. As he has never navigated open waters, you will now have to steer the barge. You will have to steer the rudder left, right, or straight using the controls on the interface. The progress bar will indicate how far you have to go to reach the island; going too far off course will reduce your progress. If it takes too long, the boat will get lost and the crew will wake up; simply talk to the Junior Navigator to start again.

Tips to get there quickly:

Once the progress bar is filled, you will arrive at Fossil Island. 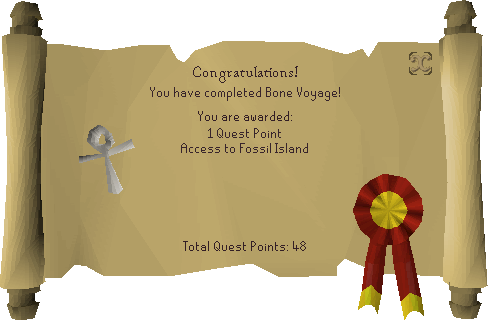 Completion of Bone Voyage is required for the following: 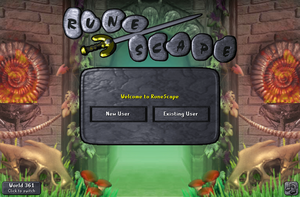 The log in screen upon the release of the Bone Voyage and Fossil Island.
Retrieved from ‘https://oldschool.runescape.wiki/w/Bone_Voyage?oldid=14281934’
Categories: