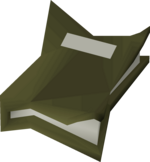 The Book of folklore, titled The Myth of the Elder-dragons, is a book found randomly on the bookshelves in the Wise Old Man's house in Draynor Village, along with the strange book and the book on chickens. Players can return the book by using it on the Wise Old Man.

The following text is transcluded from Transcript:Book of folklore.

Although the Elder-dragons are generally considered to be a myth, stories tell of an ancient race that dwelt on Gielinor before any other. In some arcane way their lifeforce was linked to the life of the world itself; it is written that, as long as the Elder-dragons continue to live, the world shall not end.

However, sceptics claim that the myth of the Elder-dragons was invented to cast doubt on claims that this realm was lifeless until the gods first arrived.
Retrieved from ‘https://oldschool.runescape.wiki/w/Book_of_folklore?oldid=14068054’
Categories: