From Old School RuneScape Wiki
Jump to: navigation, search
The RuneScape Wiki also has an article on: rsw:Boss
This article is about the strongest class of monsters. For other uses, see Boss (disambiguation).

A boss is a powerful, usually unique monster that is fought to accomplish an objective, be it the advancement or completion of a quest or minigame, or as part of a team player-versus-monster event. Many quests feature boss fights at their climaxes; such bosses are often the main antagonists of the quests or quest series, or are somehow related to the main antagonist(s). Some monsters that are commonly referred to as bosses are very powerful monsters that reside in multi-combat areas; these monsters are commonly fought by teams of players in search of highly valuable drops. Many bosses have extremely high combat levels, and most of the strongest monsters in the game are bosses.

Dwarf multicannons often cannot be set up in the areas of many bosses. Others may have different restrictions; for example, Prayer cannot be used during the fights with the final bosses of Recipe for Disaster.

Most bosses (e.g. bosses like the Corporeal Beast) also reside in a multi-way area; very few reside in single-way areas or instances. Most bosses will also generate a message upon kill telling the player what drop(s) they have obtained. For example, if players are at General Graardor and kill him (and drops Bandos tassets), a message will appear in the game box saying "Player name received item: Bandos tassets".

The Great Olm, the final boss in the Chambers of Xeric and the third strongest monster in the game.

Verzik Vitur, the final boss in the Theatre of Blood and strongest monster in the game.

All of the Wilderness bosses (not demi-bosses) can drop the Dragon pickaxe.

All of the Wilderness bosses (and demi-bosses) are located in a PvP area (except for the King Black Dragon).

Sporadic bosses are those that can't be fought whenever the player wishes to, instead, they require a special item of some sort to gain access to them, which is obtained by partaking in other more common activities. The bosses in this category can also be considered demi-bosses.

Bosses in this category require a slayer task either to the boss itself or the creature equivalent in order to kill.

Not to be confused with the actual Slayer bosses themselves. Players who have unlocked the Like a boss ability via spending 200 Slayer reward points can have Konar, Nieve/Steve, Duradel, or Krystilia assign them boss monsters in addition to the tasks they already assign. The Slayer master will randomly assign a boss if they can meet those requirements. For example, they can assign the Dagannoth Kings to any player (since there are no special requirements), but Commander Zilyana can only be assigned if the player has 70 Agility.

Once a boss has been assigned, they will ask the player to select the amount that they want to kill for their assignment. The player can select anywhere from 3-35 times (a maximum of 15 if Zulrah is assigned. or 36 if Barrows is assigned) to kill that boss or those bosses. Make sure that you want to kill that much of the boss, as once you hit enter, this decision cannot be reversed.

Note that the Slayer helmet (i) does work during boss Slayer tasks. To progress towards a boss task, the player must either land the final blow or deal the most damage to the boss, just as in regular Slayer. Bosses will also give Slayer experience upon death, and upon finishing a boss task, the player will get an additional 5,000 Slayer experience.

The following bosses can be assigned: 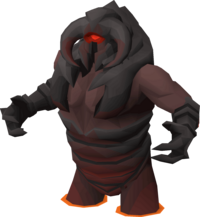 The fearsome and mighty TzKal-Zuk, an ancient adversary to the TzHaar.

These bosses are fought as parts of minigames.

The Culinaromancer, the evil culinary sorcerer, and main antagonist of Recipe for Disaster.

A large number of quests involve and/or conclude with a battle against a powerful monster, which often is or is related to the quest's main antagonist. Except where otherwise noted, these bosses can only be fought in the Nightmare Zone once their respective quest has been completed.

A sub-boss is a powerful or semi-powerful monster fought as a prelude to the actual boss fight.

Glod, a giant who resides at the top of the beanstalk in Grim Tales.

Glough, an antagonist of the gnome quest series in his mutant form in Monkey Madness II.

Some quests have several boss monsters that must be defeated, usually one after the other.

The Nightmare Zone is a minigame that allows players to fight bosses from quests they have completed. Players can fight up to 42 unique boss monsters from previous quests.