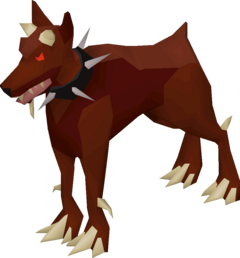 Bouncer is a hellhound that is fought during the Fight Arena quest. He is General Khazard's pet and only friend. It is possible to range or mage him from behind the skeletons that lie scattered around the arena. It is also possible to use a halberd to attack him from one of these safespots.

It is recommended that players use Protect from Melee if fighting Bouncer at close range because of his accurate attacks.

Bouncer's ghost later appears in The General's Shadow miniquest, and the player must defeat him once more.