Bouncer's ghost is the ghost of General Khazard's deceased pet hellhound named Bouncer, which the player killed during the Fight Arena quest. It is fought at the end of the The General's Shadow miniquest, and resides in a hidden area in the Goblin Cave north of Ardougne until it is slain once more by the player.

It is revealed at the end of the miniquest that Bouncer was resurrected as part of a plot to get the player killed. General Khazard did recognise the player as the one who had fought in his arena and freed the Servil family, and pretended to not know so he could lead them into a trap where Bouncer would kill them.

Prayers cannot be used against it, as an evil presence prevents them from activating inside the cave. There is a small area in the south-west corner of the cave that can be used as a safespot, with Bouncer approaching from the north. It will get stuck next to the wall. Flinching with a melee weapon also works.

Unlike Bouncer, he does not count as a Hellhound for the purpose of slayer tasks. 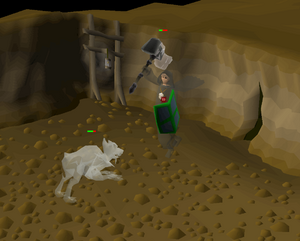