Bounty Hunter (known as BH) is a player killing minigame located in the Wilderness. As of 23 January 2020, Bounty Hunter is temporarily disabled due to concerns on gold farming. A statement regarding the future of Bounty Hunter will be released by Jagex on 24 January.

Originally released in December 2007 as part of the highly controversial update that saw the removal of PvP from the Wilderness, its first incarnation was confined to a single crater and was intended as a substitute for Wilderness player-killing. Although the August 2007 archive of RuneScape that Old School's servers were based on predated the Bounty Hunter update, both players and the development team expressed interest in bringing it back in a revised form. It was subsequently released in 2014 as a single-world activity that exists separately from and alongside traditional Wilderness PvP.

Since its release, numerous integrity updates have been implemented in Bounty Hunter to combat griefing. In addition, the Bounty Hunter world rotates between worlds 318 (UK) and 319 (USA) every two weeks to give players on different continents better ping.

Unlike most minigames, Bounty Hunter can only be played on two worlds:

Getting a target[edit | edit source]

The interface will show the following:

The interface when entering the Wilderness in a Bounty World.

The player's target will be skipped if they do one of the following:

Players can skip their targets without penalty if any of the following are true:

Players have 20 minutes to complete the task, and can skip Bounty Tasks up to three times a day. Upon completion of a task, 10 bounty points are awarded. Players also need a combat level of 50 before they are eligible to recieve tasks. The list of possible tasks are as follows:

Should at any point players violate the task's conditions or leave the Wilderness, players can no longer use their existing target to complete the task. For example, if players have to deal 150 damage using magic before killing their target, leaving the Wilderness resets the amount of damage dealt, and if players use a special attack on their target while having a task that requires killing them without using one, killing them will not count for the task and players must try again on another assigned target.

When a player catches up with their target they will then be faced with the task of killing them, as well as fulfilling the Bounty Task assigned to the player should they have one.

If players are in possession of a mysterious emblem, which are purchasable from the Emblem Trader, their emblem will be upgraded to the next tier providing that the target is in possession of an emblem of equal or higher tier themselves, while the loser's emblem is destroyed. If the loser does not have an equal or higher tier emblem in their possession and is killed, the winner will not have theirs upgraded. An ironman player cannot upgrade their emblem this way.

After killing a target, players cannot be attacked for 20 seconds, unless they attack another player before the immunity timer runs out.

Each tier upgrade doubles the value of the player's emblem, which adds a small extra source of income from player killing, as the emblems can be sold back to the trader. 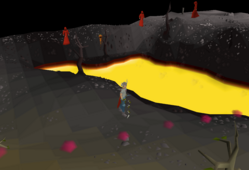 A player standing inside a hotspot, indicated by the hotspot markers.

Hotspots are locations within the wilderness in which players are given extra benefits for killing targets within the hotspot boundaries. In order to be eligible to receive these benefits, players must have a combat level of at least 50, as well as having a mysterious emblem in their possession.

In hotspots, players will receive triple the usual amount of bounty points for killing their targets, including points from Bounty Tasks. In addition, if players have a kill streak of two, killing a target upgrades one of the opponent's emblems, as well as the player's. If carrying multiple emblems, the highest tier is upgraded first. 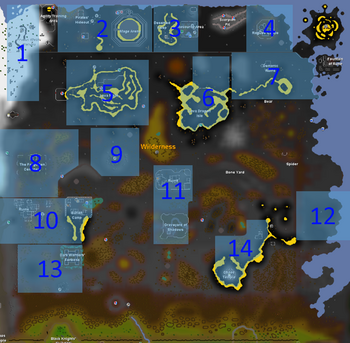 Hotspots cycle every 30 minutes between the following locations, with those in multicombat areas being selected less frequently:

The main reward for playing Bounty Hunter is the bounty points that are received upon killing a target. Killing multiple targets in a row begins a killstreak, which awards more points the higher the player's killstreak. Players can receive additional bounty points by killing a set amount of target kills, similar to slayer assignment completion streaks:

These points can be then used to purchase rewards from the Bounty Hunter Shop.