From Old School RuneScape Wiki
Jump to navigation Jump to search
The RuneScape Wiki also has an article on: rsw:Braindeath Island

Braindeath Island is the location for the Rum Deal quest and can only be accessed after starting Rum Deal. It is the only location of Fever spiders, which can be assigned as Slayer tasks. Players can talk to Pirate Pete at the dock outside and north of Port Phasmatys to get a lift to the island. The island isn't shown on the RuneScape World Map surface, although its climate and culture suggest it is somewhere in the Eastern Sea.

Braindeath Island houses a brewery, which is the main producer of Braindeath 'rum'. The 'rum' is then shipped to other nearby islands, such as Mos Le'Harmless. However, a large number of zombie pirates of The Inebriated's crew have recently appeared, demanding the factory's 'rum'. Since then, the brewery has not produced any, and the pirates of Mos Le'Harmless have been forced to brew it themselves using local ingredients. They, too, have had some trouble brewing.

Most of the island is one massive brewery, but oddly, players cannot brew here. Beneath the brewery is a small area where many fever spiders can be found and killed by those with a minimum Slayer level of 42; wearing Slayer gloves is recommended when fighting these spiders to avoid becoming diseased. The basement also contains a bucket spawn and a cupboard that, during Rum Deal, contains Farming equipment that players can use. 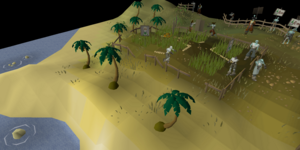 The trashed farming patches by the beach.

Beyond the brewery there is very little else of interest. There is a blindweed patch, although it serves no use other than during the Rum Deal quest. There are also several fishing spots, where players can capture sea slugs and karamthulhu. Neither of these have a use except during the quest. It is unknown why the mind-controlling sea slugs are prevalent here and in Witchaven's Fishing Platform area but have not been seen elsewhere.

There is also a large volcano on the north side of the island. The volcano is apparently dormant or extinct. Its crater contains no lava whatsoever; instead, it is full of stagnant water, which is used to make Braindeath 'rum' during Rum Deal. The approach to the volcano is guarded by 50% Luke, a particularly odd pirate.

If a player loses the holy wrench obtained during Rum Deal, they can talk to Davey to get another one. The player can obtain multiple wrenches by dropping them and talking to Davey again; however, their effects won't stack.

Players should go to the dock north-east of Port Phasmatys and the Ectofuntus and talk to Pirate Pete there. He will transport players to the island using his unique bottle teleport method.

The quickest way to get to the dock is to use the Ectophial to teleport to the Ectofuntus. The ectophial is obtained during the Ghosts Ahoy quest.

Another quick way to get to Pirate Pete is by chartering a ship in Catherby to Port Phasmatys and running to the north through the energy barrier to Pirate Pete.