Brimhaven is a members-only pirate town located on north-western Karamja and led by the wealthy Scarface Pete. It is a tropical town with mainly wooden or bamboo buildings (the exceptions being Pete's mansion and Mr. Olbors's house, which are made of brick). Although it is mainly inhabited by pirates, who run the Dead Man's Chest inn and the famous Agility Arena, for example, it is also the home of Sandy's Sand Corporation and contains outposts of two Varrockian crime gangs aiming to rob the pirate leader. The street from The Shrimp and Parrot restaurant to Davon's Amulet Store. is called Palm Street. 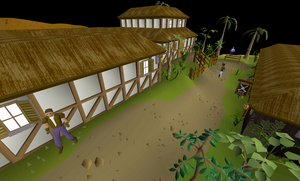 A view of Palm Street, with the Dead Man's Chest on the right and the Black Arm Gang's hideout on the left.

The charter ships also have a dock in the harbour in the north of Brimhaven. It provides rides to several other locations. After completing Cabin Fever, the charter ship fare is reduced by 50%. Wearing the ring of charos(a) also reduces the fare by 50%. These two bonuses can be stacked to reduce the cost to 25%.