From Old School RuneScape Wiki
Jump to navigation Jump to search
The RuneScape Wiki also has an article on: rsw:Brimhaven Agility Arena

The tickets can be traded in to Pirate Jackie the Fruit for Agility experience or a selection of items.

The best experience per hour rates will be achieved by non-stop completing Agility obstacles during the waiting time for the active Ticket Dispenser to move.

There are several different methods for travelling to the Brimhaven Agility Arena. The best options, ordered from fast to slow, are:

It is important to be able to quickly traverse the arena in order to tag the Ticket Dispenser in time. Since the time needed to cross an obstacle varies heavily, the shortest route is not always the quickest. The image on the right will give a rule of thumb on what the quickest way is to get from one end of the arena to the other.

It is not particularly difficult to tag each dispenser in time unless the player is not maintaining focus, so learning the quickest routes may not be necessary for most players. 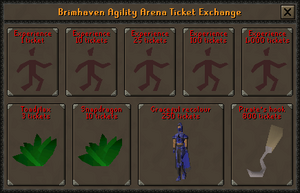 For each pillar successfully tagged while active, the player will be awarded a ticket. Players who have completed the elite tasks in the Karamja Diary will have a 10% chance to receive two tickets upon tagging a pillar. These tickets can be traded in with Pirate Jackie the Fruit for Agility experience or a selection of items.

Trade tickets with Pirate Jackie the Fruit in return for Agility experience. If more tickets are traded in at once, the experience reward per ticket will be increased. Additionally, players wearing Karamja gloves 2, 3 or 4 will receive 10% more base experience per ticket.

The experience reward per ticket is increased by 5 experience for each Agility level above 40, resulting in the following formula:

Visit this calculator to see the experience reward for each given Agility level: Agility Arena tickets experience calculator.

With Karamja gloves 2 or higher it is most efficient to turn in 1000 tickets at a time starting at level 52 Agility, or 51 without the gloves but it is highly recommended to get these before handing in large batches of tickets.

There is also a selection of items that can be bought from Pirate Jackie the Fruit in return for tickets.