The Brine Rat Cavern, also known as Sven's cave, is a dungeon accessible during and after Olaf's Quest. Players can enter the dungeon by digging with a spade south of the windswept tree, which is on a plateau east of Olaf Hradson and south-east of the Rellekka Hunter area. When the hole is dug, the player falls through it and is stunned for a few seconds, but no damage is taken. The player cannot exit the cavern from this point.

The south-western part of the cavern contains the exit back to the surface world. To exit, the player must roll back the rock to expose a cave leading to the outside. After exiting, the rock rolls back to block the cave, so the cavern cannot be entered by this route. 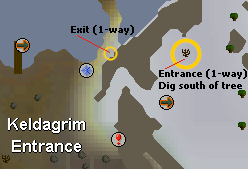 The entrance to the cavern.

The cavern actually consists of the main cavern, an outdoors area on the coast, a slippery walkway, another outdoors, coastal area, and a small shallow cavern south of the second coastal area. Neither of the coastal areas appear on the world map, so the entire complex is considered a single dungeon.

Dwarf multicannons may be used here.

The Brine Rat Cavern is in the north-eastern region of the Fremennik Province. This is a remote area and takes some time to walk to. There are some faster means to get here:

The cavern is somewhat remote from a bank. The bank in Keldagrim is physically the closest. A player with access to the fairy rings will likely find the bank in Zanaris more convenient. Otherwise Etceteria, Neitiznot, Jatizso, and Seers are the closest banks.

A tour of the cavern[edit | edit source]

The cavern has the following features:

1. Entrance from the outside world. You cannot return to the surface here.

2. Exit to the outside world. There is a cave passage behind a rock here. You exit the cavern by rolling the rock out of the way and then using the passage.

4. Brine rats - These rats are not aggressive and have some good drops, including many death runes, noted raw sharks, noted raw lobsters, the rare Brine sabre, and other items.

5. Skeleton fremenniks - These are level 40. Skeletons here or in Area 7 can be killed to obtain a key to the gate.

6. Picture door. During Olaf's Quest, players must solve a picture puzzle to open this door. Afterwards, players can open the door using a right-click option.

7. First coastal area. This is outdoors but does not appear on the world map. Skeleton fremenniks, levels 50 and 60, are here, as is one Rock Crab. Skeletons here or in Area 5 can be killed to obtain a key to the gate. Players can collect rope and rotting barrels here. (A player can quickly collect a full inventory of rope, but the area's distance from a bank makes it inconvenient as a free rope source for most purposes.)

8. Slippery wooden walkway. This connects the two coastal areas. A good Agility level helps in crossing the walkway, as does having nothing held in your hands (no weapons, shields, etc., equipped). Possibly, walking (not running) one square at a time across the walkway may help. If you slip, you will fall into the sea and be washed up on shore in the outside world, near the exit point of the cavern. The walkway does not become safer after the quest. 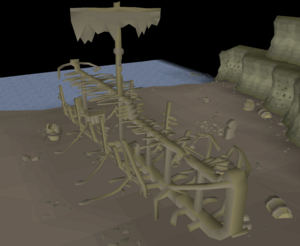 The remains of Sven's ship and Ulfric's grave.

9. Gate - When travelling west-to-east, this gate must be unlocked with a key dropped by a Skeleton fremennik you kill. Clicking on the gate calls a puzzle screen where you must match the shape of the key to correct lock. The key can have five different shapes. Unlike the picture door, even after the quest you must solve this puzzle each time you want to open the gate from the west. The key disappears when you unlock the gate. You do not need a key to open the gate when travelling in the other direction (east-to-west).

10. Second coastal area. This has level 60 Skeleton fremenniks and another rock crab. The wreck of Ulfric's ship is here, as is Ulfric's gravestone marking his grave. During Olaf's Quest, a chest is also here, and opening it triggers the climactic battle between you and Ulfric's skeleton. The back (south) of this coastal area turns into a small, shallow cavern. 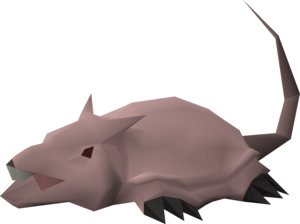