Brine rats are Slayer monsters that can be found in the Brine Rat Cavern near Rellekka. They are notable for being the only monsters to drop the Brine sabre. A Slayer level of 47 is required to fight them, and a spade is required to access the cavern.

They are only assigned to players who have progressed in Olaf's Quest to the point where they need to enter the Brine Rat Cavern. Additionally, they can be killed as an alternative for a rat Slayer task provided the player has the appropriate Slayer level to do so.

Brine rats have relatively low Defence, but fairly high Strength and Attack. As such, it is recommended to bring food if players do not have high (~70) Defence.

Alternatively, players can bring Bones to peaches (tablet) to convert their bones drops to peaches, which heal 8 hitpoints each. Bringing logs and a tinderbox to cook and eat the Raw rat meat and other raw fish that they drop is also an option, though this is significantly more time consuming and less efficient than using peaches.

Killing a Brine rat is a requirement for completing the medium task set in the Fremennik Diary. 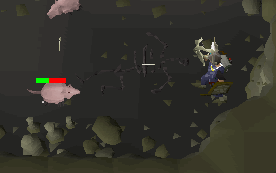 Drop rates estimated based on 128,958 kills from the Drop Rate Project, unless otherwise cited.