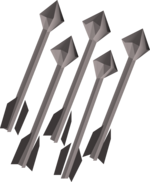 Broad bolts (or Broad-tipped bolts) are bolts used for a crossbow. They provide the same ranged strength as adamant bolts (+100). Players can buy a set of 250 for 35 Slayer reward points from any Slayer master. Broad bolts, or their arrow equivalents, are required by players who intend to slay Turoth or Kurasks using ranged.

Many members use broad bolts for training and general ranging because they are as strong as adamant bolts but are significantly cheaper.

Players with 55 Fletching and who have unlocked the "Broader fletching" ability for 300 Slayer reward points can make broad bolts by adding feathers to unfinished broad bolts, which are purchased from any Slayer master for coins. Broad bolts are fletched 10 at a time and give 3 Fletching experience per bolt, or 30 experience per set of 10 bolts made.

Fletching broad bolts is a common method of training Fletching for Ironman players, as unfinished broad bolts can be purchased in bulk.