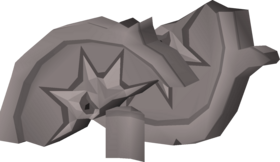 The Broken sun altar is a piece of interactive scenery found in the Altar of the Sun within the Forthos Dungeon. It is a broken altar dedicated to Ralos, destroyed by the undead druids in the dungeon. It currently cannot be repaired by any means.

Despite being broken, players can still attempt to pray there, but will result in the standard praying animation and a message in the player's chatbox stating "You pray at the altar, nothing interesting happens."

The praying animation at the broken sun altar after the Knight of Varlamore arrives.

Once players complete In Search of Knowledge and have used the temple coin on the stone relief, they can speak to the Knight of Varlamore and inform him about the dungeon; he will then be found by the broken sun altar. Once he is there, praying at the broken altar will result in a different animation rather than the standard praying animation.