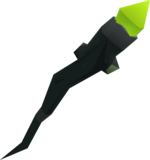 The bruma torch is a possible reward from a supply crate, which is obtained from subduing the Wintertodt.

The torch acts as an equippable light source and as a warm clothing item in the Wintertodt boss fight. The torch works as a light source unequipped, and can be used to light braziers instead of a tinderbox in the Wintertodt's prison. In addition, it can be used to smoke deadfall traps. This item can be stored in the magic wardrobe of a costume room.

The torch does not cause explosions in the Lumbridge Swamp Caves if used as a light source.