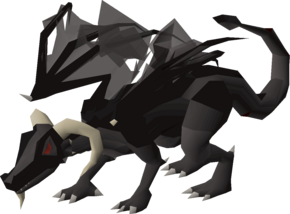 Brutal black dragons are slayer monsters found in the

Catacombs of Kourend. Requiring level 77 Slayer in order to be damaged, they are a tougher version of black dragons and as such can be killed as an alternative for a black dragon Slayer task.

Players can access the dragons by heading towards the Dragon's Den and running past the brutal blue and red dragons, or alternatively, use the hole found in Lovakengj to take them there immediately (unlocking this shortcut requires climbing up the vine from inside the catacombs first).

Like all brutal dragons, they use Melee, Magic and long-range dragonfire. Using both Protect from Magic (with a couple of prayer potions) and an antifire potion will completely protect players from damage, if players don't stand in Melee range.

Brutal black dragons are known for dropping the dragon spear not via the rare drop table, being one of the most frequent droppers of it.

There is a 1 in 128 chance of hitting the unique drop table. Below lists the effective drop rates.