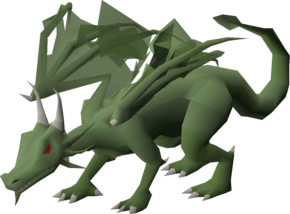 Unlike other brutal and high-levelled dragons, brutal green dragons do not drop the draconic visage.

One is fought during Dragon Slayer II

The dragon's attacks from afar.

The dragons will use Melee if an opponent walks close to them. They do not move to attack with Melee as they rely on their Magic attack and firebreath attack to inflict their significant damage. You do not need an anti dragonfire shield, an anti-fire potion is enough protection for you to take 0 damage.