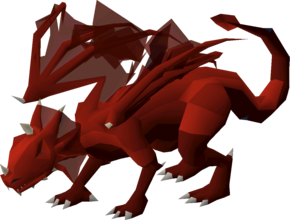 Catacombs of Kourend, between the brutal blue and brutal black dragons. They can be killed as part of a red dragon Slayer task.

They possess the same melee and ranged defences as the weaker brutal blue variant, yet more Hitpoints and a more lucrative drop table. This could make red dragons a Slayer task worth unlocking.

Like all brutal dragons, they use Melee, Magic and long-range dragonfire. Using both Protect from Magic and an antifire potion will completely protect players from their dragonfire and magic attacks, and they can be safespotted this way if not standing within melee range.

One of these dragons is fought during Dragon Slayer II.

Drop rates estimated based on 5,309 kills from the Drop Rate Project, unless otherwise cited.