Bryophyta, the Moss Giantess, is an ancient and mystical moss giant boss who can be found in her lair in the Varrock Sewers. Bryophyta's lair is located just north of where the moss giants reside in the sewers, accessible either through the Varrock Sewers itself or by the agility shortcut from the Edgeville Dungeon. (51 Agility required)

In order to access Bryophyta's lair, the player must obtain a mossy key from a moss giant. Each mossy key permits for only one attempt, similar to accessing Obor's lair with a giant key.

Bryophyta drops Bryophyta's essence, which is used to make Bryophyta's staff. This item can store nature runes, and has a chance to not consume them when casting a spell that uses them. It cannot be obtained in any other way besides trading with players.

In order to reach Bryophyta, players will need a knife or slash weapon to slash the web to get to the lair if they are reaching her via the Varrock Sewers. Members with level 51 Agility do not need this as they can access an agility shortcut by Vannaka in the Edgeville Dungeon.

Unlike Obor's chambers (where he is confined in a small pit), players are immediately taken to Bryophyta's chambers, where she will attack them on sight - prior to entering the room, or immediately after entering, activate Protect from Magic. 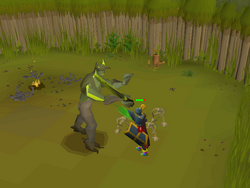 On members worlds, she is also capable of poisoning players, starting at 8 damage, so it is recommended to bring some form of poison protection to cure her poison. Unlike Obor, she does not take protection prayers into account.

During the fight, she may summon three growthlings - they are fairly weak, but they must be killed, as Bryophyta is immune to all damage (except poison and venom) while they are alive. In order to finish them, an axe (blessed axe does not work) or secateurs must be used (not wielded) on them once they have been reduced to 1 hitpoint through standard combat. Players can grab a bronze axe from the pile of logs if they didn't bring one. She can only have one batch of growthlings in the chambers at a time, but can summon more if the previous batch were killed off.

F2P players are recommended to bring green d'hide armour for the increased magic defence, as well as a rune kiteshield and rune full helm for the most optimal setup against her attacks. Regarding offence the player is best off with a rune scimitar. The recommended stats for fighting Bryophyta is a minimum of 50 in strength, attack and defence. Ranging Bryophyta is the most optimal for mid level F2P players with at least 60 ranged, 40 defence and 37 prayer. Players should wear green d'hide armour, a coif, an amulet of power, and a maple shortbow with some adamant arrows. While ranging Bryophyta, ensuring a safe distance is optimal, which is easy as she will not move towards you. She will not use her melee attacks if a player is out of her reach and she will do little damage if protect from magic is being used. Magic is only viable for members, since they can wear void knight or elite void knight equipment with the void mage helm.

Drop rates estimated based on 295,781 kills from the Drop Rate Project, unless otherwise cited.

There is a 5/118 chance of rolling the herb drop table.

There is a 6/118 chance of rolling the uncommon seed drop table.