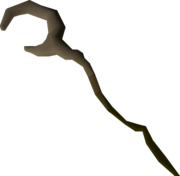 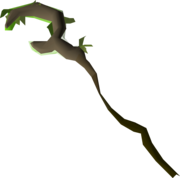 Bryophyta's staff is a staff requiring level 30 Attack and Magic to wield. It is created by using a battlestaff with Bryophyta's essence, which requires level 62 Crafting. Its stats are almost identical to the Ancient staff but without the -1 Prayer bonus and attacks one tick slower. It is also a possible requirement for a Clue scroll (master) emote clue.

The staff can be used along with a Tome of Fire to increase profits with High Level Alchemy; however, it takes a very long time for the extra profit to pay for the staff and tome.

The staff is untradeable while it has any charges. Players can use a right-click option to remove all of the staff's charges, but the nature runes stored within it are not returned.