From Old School RuneScape Wiki
Jump to navigation Jump to search
The RuneScape Wiki also has an article on: rsw:Bunkdo
Bunkdo? (edit) 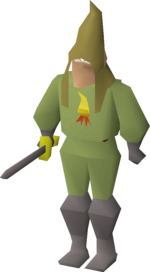 Bunkdo is a member of the 10th Squad who is imprisoned in the jail in Marim, Ape Atoll. He and his squad were sent by King Narnode Shareen to oversee the decommissioning of the Shipyard on Karamja, following Glough's defeat. However, the gnome gliders the squad were using as transport were caught in a strong wind, causing them to crash on Crash Island. Bunkdo accompanied Sergeant Garkor to the nearby Ape Atoll. However, he and two of his squad, Carado and Lumo, were captured by the simian natives and thrown in jail.

Glough's agents, G.L.O. Caranock and Waydar, attempted to have the entire 10th Squad killed off with the aid of King Awowogei, the leader of Ape Atoll. They used teleportation magic to transport anybody wearing a 10th squad sigil into an arena where a jungle demon waited, including the three gnomes in prison. However, a human had been inducted into the squad shortly before the ambush was sprung, who fought the demon while Bunkdo and the rest of the squad provided assistance.

The 10th Squad remain on Ape Atoll to gather intelligence on the monkeys. Bunkdo, Carado and Lumo allowed themselves to be recaptured and remain in the prison.