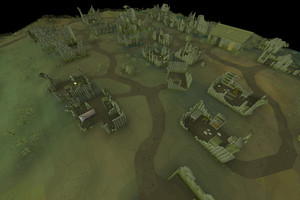 Burgh de Rott is a Members-only town located in the southernmost part of Morytania. It is a focal part of the In Aid of the Myreque quest and can only be accessed after you start the quest. Places of interest include the bank, the furnace, the general store, fishing spots and the bar.

Hallowvale was a city located in the south of the Hallowland, named in honour of the powerful Queen Efaritay, an Icyene. Unfortunately her husband Ascertes was kidnapped by Lord Drakan and she became Drakan's servant to save her husband. As the legions of the Sanguinesti region descended upon the Hallowland, the citizens of Hallowvale fled to the Paterdomus temple. But as they abandoned their town, refugees fleeing the Sanguinesti region found the abandoned settlement and inhabited it. Not seeing any life in the town, the Vyrewatch ignored it, thus sparing the town from the blood tithe.

To access the general store you must repair it first using 6 planks and 24 nails. After repairing it players must stock it with 10 bronze axes, 3 tinderboxes and either 10 mackerel or 10 snails.

All the fishing spots in Burgh de Rott are Big net/harpoon fishing spots, making this town nearly as convenient as Catherby. There also is a small fishing net spawn location in a ruined house east of the docks.

This town has the fifth-closest furnace to a bank, behind Port Phasmatys, Shilo Village, Edgeville and Neitiznot.