From Old School RuneScape Wiki
Jump to: navigation, search
The RuneScape Wiki also has an article on: rsw:Burntmeat
This article is about the non-player character. For the item, see Burnt meat.
Burntmeat 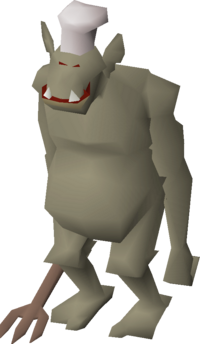 Burntmeat believes that he is a master chef, and after Eadgar's Ruse and My Arm's Big Adventure he gives the player a reward, burnt meat, which he claims is very valuable.