The Principality of Burthorpe is a military principality north-west of Falador and north of Taverley, and is currently the base of the Burthorpe Imperial Guard as well as the residence of Crown Prince Anlaf. Burthorpe is one of the only locations in Asgarnia that isn't controlled by the White Knights. The Imperial Guard keep Burthorpe secure, and they are loyal to the royal line of Asgarnia, especially Crown Prince Anlaf. They are charged with maintaining and defending the citadel which stands between Burthorpe and Trollheim.

Trollheim is immediately north of Burthorpe, and due to that, the town has come under constant attacks, raids and invasions by the Trolls, having led to the Burthorpe - Troll Country War. Death Plateau in particular seems a threat, as many heavily armed trolls have a permanent camp there. The Imperial Guard, with help of adventurers, has been taking measures to reduce this threat. Trolls are often seen invading the town, slaughtering families and soldiers alike. If the trolls were to overrun Burthorpe, Falador will use it as a reason to disband the Imperial Guard and the town would come under control of the White Knights. Commander Denulth considers the White Knights to be taking advantage of King Vallance, who he describes as "old and weak".

Burthorpe can be accessed from one of the following methods: 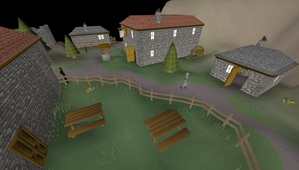 The civilian area in the east, abutting upon the Wilderness.

The following quests may be started in Burthorpe:

Speaking to any member of the Imperial Guard except for major NPCs, (essentially any attackable Soldier), results in "jargon", which is actually a statement in the Latin language. A few of these statements and their English translations are given below:

A more extensive list of these Latin statements and their English translations can be found on the NPC page for the attackable soldiers.