From Old School RuneScape Wiki
Jump to navigation Jump to search
The RuneScape Wiki also has an article on: rsw:Burthorpe Games Room

The Burthorpe Games Room is a minigame area located under Burthorpe Castle in Burthorpe. Players can teleport there using a games necklace, or by using the Grouping interface. There are no rewards or prizes for playing each except for game rankings. A branch of the Toad and Chicken pub is located by the entrance, Sam and Rachael both sell glasses of beer: Asgarnian ale, Wizard's mind bomb, and Dwarven stout for 2 coins each.

The games offered are identical to the ones at the Games Zone.

The games in the Burthorpe Games Room are quite common brain-teasing puzzle games, such as Othello, Draughts (known as checkers in North America), and Connect Four. They are played with one person at a time, and the player can be challenged to any of the four games via the lobby. However, at the end of each game, the player is placed in a room in which they can only challenge their opponent to another match of the previous game; making it so you must return to the main room prior to challenging them to a different game.

Players need 1,500 rank in the relevant game in order to go to some of the upstairs rooms in the Games Room. 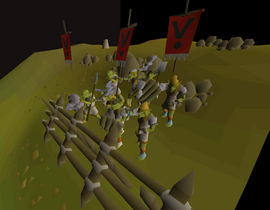 The goblin army seen during the quest from the western side of the Burthorpe Games Room.