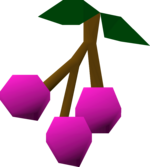 The location of the Cadava bushes.

Cadava berries are pink, poisonous berries. They can be found south of Varrock, just west of the south-east Varrock mine. Because cadava berries are poisonous, one cannot eat them. Members can also grow their own cadava berries; one seed can produce a minimum of 4 berries, where the Farming level reduces the chance of using up one of the three "lives" of the patch, much like harvesting herb patches.

One bunch of cadava berries can be traded at the Apothecary in Varrock for a cadava potion, a quest item needed for the Romeo & Juliet quest. This potion is untradeable and cannot be created after the quest is finished. When a cadava potion is drunk, the drinker will fall into a deep death-like sleep and (allegedly) wake up hours later.

During the quest Making Friends with My Arm, one bunch of cadava berries is traded to the Apothecary in Varrock for a reduced cadava potion. Again, this cannot be done when the quest has been completed.

Six cadava berries are needed to pay the farmers at the Al Kharid cactus patch and the Farming Guild to keep the growing cactus, which one can plant at level 55 Farming, from getting diseased. Cadava berries can be used to make compost.

According to the book Gielinor's flora - bushes, Cadava is an old word which translates to corpse, as all parts of the bush are poisonous. If ingested they can cause stomach pain, vomiting, reduced heart rate, blurred vision and drowsiness.

During Beneath Cursed Sands Zahur deducts that the wood of the cadava bush is what has caused the plague of red spots that has hit the people of Sophanem, she is however unsure how the people came into contact with it, since cadava bushes are not native to the Kharidian Desert.