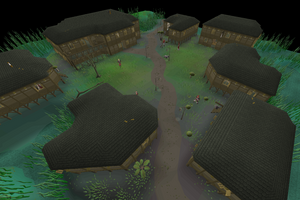 Canifis is a small town in Morytania, which lies to the east of Varrock. It is only accessible to players who have completed the Priest in Peril quest. The town is inhabited by werewolves in human form, and many of the citizens and shops have references to dogs in their names. Canifis houses a secret base used by The Myreque, and is the starting point for a number of quests in the Myreque storyline.

There is a bank in eastern Canifis.

The Canifis Rooftop Course is available to players with an Agility level of 40 or above.

Mazchna is the second Slayer master. His Slayer tasks are relatively easy and are mainly used by people with low combat levels.

The clothes shop, Barkers' Haberdashery, is in the northern part of the city. All items cost 650 coins each, except for the capes which cost 20 coins each. Coloured gloves and capes are tradeable to free-to-play players, all other items are members only.

Sbott the tanner will tan cowhides or dragonhides for you.

The Taxidermist will stuff any monster heads or big fish you catch for a price. These stuffed items can be then used in a player-owned house.

The shop is more expensive than most other shops in RuneScape. It also sells thread and needles which can be useful for the Creature of Fenkenstrain quest.

The raw meat shop lies to the north of the bank.

The bittercap mushroom patch located west of Canifis is used in the Farming skill.

The bartender Roavar will sell you a moonlight mead for 5 coins. There are also several quests related NPCs. There is a shortcut to Mort'ton down a ladder behind the inn (requires completion of In Search of the Myreque to access shortcut).