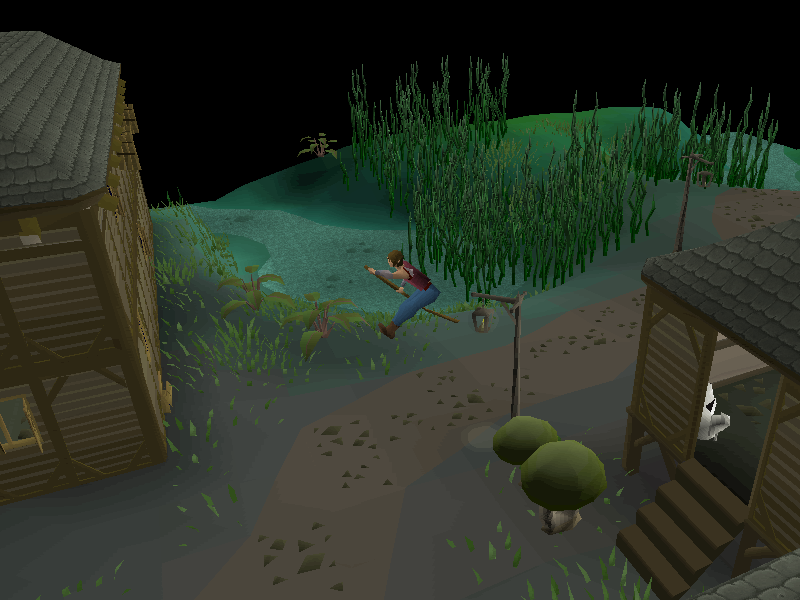 The Canafis Rooftop Agility Course can be started by climbing the Tall Tree just north of the bank and is finished by jumping off the north side of the bank. Players get 240 experience from completing the course, including 175 experience upon completion of the course. The Canifis Rooftop Course is the best rooftop course to get Marks of Grace, as it is the quickest to get between each individual obstacle, for how many gaps there are. On average, players will receive one mark every 3.3 laps[1]. Above level 60 (20 levels above the course requirement) players receive only 20% of the regular rate of marks of grace[2].

It is recommended to change your NPC 'Attack' option priority to "Hidden" to avoid a misclick, as Eduard tends to hang in the corner of the bank; with one's camera panned down, it is quite easy to click on him rather than the tree. If you would like to keep your attack option priority the same, you can equip Wolfbane so that if you misclick, you are fine. Alternatively wielding a bow (except crystal bows) without ammo will prevent accidentally attacking NPCs as well.

With an average time of 44 seconds per lap, it is possible to get around 19.5k Agility experience per hour from this course. (Although an average of 14.5k xp/h is normal when levelling from 40-50, as failing obstacles is not uncommon). Additionally, due to the short distance between obstacles, it is possible to completely fill one's run energy while manoeuvring the course.

There are 2 failable obstacles in this agility course. The first is the jump between the tanner and the general store (Jump Gap 3) and the second is the jump from the inn to the bank (Jump Gap 5). Failing an obstacle will inflict up to 8 points of damage. Players will often fail Jump Gap 5 which is near the end of the lap and, since most XP is gained upon completing the lap, this will contribute to decrease the xp/h ratio significantly. It is recommended to have some food stored in the bank here in case you repeatedly fail obstacles. It's possible to fail either jump repeatedly even at 60 Agility.