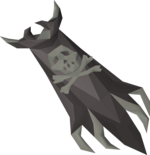 The Cape of skulls is a rare reward obtained from easy Treasure Trails.

It has identical defensive bonuses to the obsidian cape.