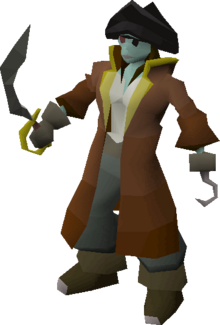 Morytania✓Morytania? (edit)MaleTalk-toI wonder if it was all the 'rum' that pickled him.

Captain Donnie of The Inebriated is the captain of the zombie pirates that have invaded Braindeath Island. He is involved in the quest Rum Deal, in which you need to make the Unsanitary Swill for him to drink so that he will reveal whom he works for. He says he works for Rabid Jack.

During Rum Deal, Donnie and his crew lays siege to Braindeath Isle, specifically the 'rum' factory. After having made fresh 'rum', Captain Braindeath feeds him drunk with the aid of an adventurer and a deal is made: the zombies will stop meddling with the 'rum' production as long as they get some.