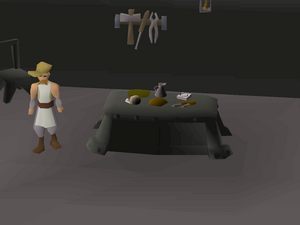 The Carefree Crafting Stall is a market store run by Nolar, found on the eastern ground floor of Keldagrim Palace. It can be found between Hirko's crossbow stall and Green Gemstone Gems. The shop is run by Nolar, a dwarf crafstman and open supporter of The White Chisel, an industrial company and member of the Keldagrim Consortium. The Carefree Crafting Stall stocks buyable Crafting gear, and can also be stolen from using the Thieving skill at level 5, granting 16 experience in the process.

Apart from Hamab's Crafting Emporium in the Marim settlement of Ape Atoll, the Carefree Crafting Stall is the only crafting stall that can be stolen from. To do so, players need a Thieving level of 5. Stealing from the stall yields 16 experience, and the stall's supply itself respawns approximately every 2.5 seconds. Chisels, ring moulds, and necklace moulds are all potential loot. These can be potentially useful when mining gold ore or silver ore in city mines such as the Arzinian Mine, or Keldagrim south-west mine. A bank on the city's west side can also be used to store loot.

However, players should exercise caution in stealing in the Keldagrim Palace Market, as level 48 Black Guard soldiers patrol the area regularly. If players are noticed while stealing from the Carefree Crafting Stall, they may be attacked. Players can either kill the attacking guard or run to the opposite end of the market; doing so will usually place them outside the guard's wander radius, leaving them free to return to the stall again. Guards may also become stuck behind the pillar and supply boxes immediately east of the stall while attempting to first engage the player.

A successful looting attempt will gain one the following items: