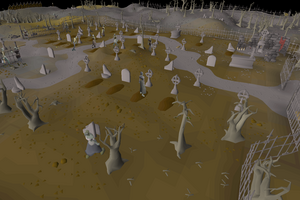 The Graveyard of Shadows (not to be confused with the Forgotten Cemetery), known in ancient times as Carrallangar, is located at levels 18-21 in the Wilderness. This location is a large and seemingly forgotten graveyard full of dead trees, zombies, and derelict gravestones. Players with 84 Magic and who have completed Desert Treasure can teleport here with the Carrallangar Teleport Ancient Magicks spell.

The Graveyard features many item spawns. There are 5 planks, 4 tiles, a crossbow, an iron dagger, a steel dagger, and an iron med helm spawn.

As mentioned above, the Graveyard of Shadows contains numerous zombies and several barriers that can be used for safespotting Magic or Ranged. Players can afk train on zombies in the northeast section of the graveyard and run back to the Ferox Enclave to bank and use the Pool of Refreshment. This location is not recommended, however, due to the danger posed by wandering player killers and other enemies.

Digging directly under the crossbow respawn in level 18 Wilderness is the solution to a hard cryptic clue: I lie lonely and forgotten in mid wilderness, where the dead rise from their beds. Feel free to quarrel and wind me up and dig while you shoot their heads.

Carrallangar was a Zarosian fortress that was located in current-day Wilderness. It was destroyed during the Third Age when Zaros's settlements were being wiped out by followers of Zamorak and Saradomin. Carrallangar stood where the Graveyard of Shadows resides today.

It was destroyed relatively early in the Third Age, when both Zamorakian and Saradominist forces were attempting to remove all traces of the defeated Zaros from Gielinor. The precise date of Carrallangar's destruction is not known, but it was after Senntisten fell, as Carrallangar was one of the places that the survivors of that city's destruction fled to.