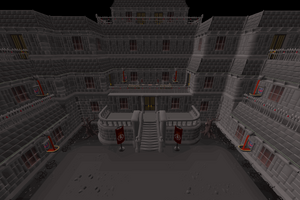 Castle Drakan is the home of Lord Drakan, the vampyre lord of Morytania and the rest of the Drakan family. Located in the western part of the vampyre city of Darkmeyer, just north of Meiyerditch, it looms over the Sanguinesti region and reminds all that are trapped there of the vampyres' dominance. Currently, four vampyres can be seen roaming the castle grounds: three Vyrewatch and a Vampyre juvenile. The castle is surrounded by a tall wall making it inaccessible. Waste pipes, seen on the side of the castle wall leaking strange liquid to the swamp, have infected the citizens of Mort'ton and Mort Myre.

In the quest Darkness of Hallowvale, the player must assist Safalaan Hallow, a member of The Myreque, in drawing the castle from the north, west and south. Also below the castle walls at a certain point of drawing the castle, players see a cutscene with Vanstrom Klause speaking to Lord Drakan's relatives and a Vampyre juvinate.

In Sins of the Father Vanescula Drakan leads the remaining members of the Myreque, whom she has allied with, into the courtyard of the usually inaccessible castle to face and kill Lord Drakan. Lord Drakan appears on the main staircase and descends it to confront his sister. He quickly subdues Vanescula and incinerates most of the Myreque, before returning to the castle with his unconscious sister, and leave Vanstrom Klause to deal with the remaining survivors, the player, Safalaan, Ivan Strom and Veliaf Hurtz, although the player ends up having to defeat Vanstrom alone in the courtyard. After Vanstrom's defeat Ivan manages to teleport himself, the player and Veliaf out as the vampyre sentinels start to swoop in, but they have to abandon Safalaan. After this Castle Drakan and its grounds once more become inaccessible.