The castle sketch 3 is a quest item made during the Darkness of Hallowvale quest. It is a sketch of the southern part of Castle Drakan. It is made by using a piece of charcoal on a sheet of papyrus while standing on the South side of the castle (just a few step west from where Safalaan give you the mission to sketch out the castle) at the north end of Meiyerditch.

When the player attempts to make this sketch, they will be interrupted by a cutscene with Vanstrom Klause, Vanescula Drakan and her brother, Ranis Drakan. After this, Vanstrom attacks the player, but they are saved by Sarius Guile. Note that the player still has not finished the sketch after this cutscene as they were interrupted. The sketch must be given to Safalaan along with castle sketch 1 and castle sketch 2 to complete the intelligence-gathering part of the quest. 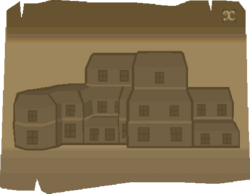 A detailed view of the sketch.
Retrieved from ‘https://oldschool.runescape.wiki/w/Castle_sketch_3?oldid=14138886’
Categories: