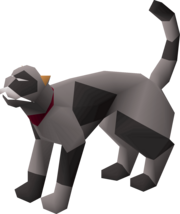 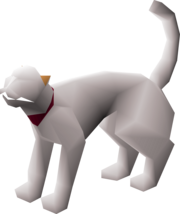 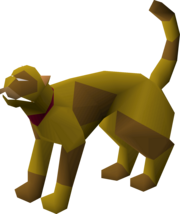 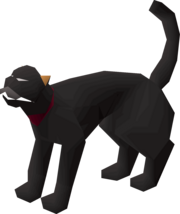 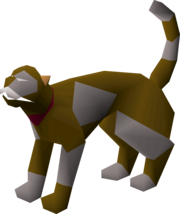 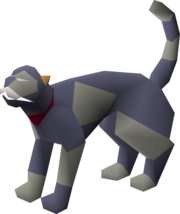 Cats are common pets that can follow the player. In order to obtain a pet cat, a player must complete the Gertrude's Cat quest, after which Gertrude will give them a kitten as part of the reward. After three hours, the kitten will grow into a pet cat. Cats no longer need the food or attention required of a kitten, and will not run away.

Only one kitten may be owned at a time, including the hellkitten variant. Players may purchase a new kitten from Gertrude for 100 coins whenever their current kitten turns into an overgrown cat, or their cat is stored in a player-owned house menagerie. The colour of the kitten will be randomised, unless the player wears a Ring of Charos (a) while purchasing the kitten, which allows them to choose the colour.

Any type of cat can be turned into a Hellcat variant by chasing the hell-rats in Evil Dave's basement. Hellcats can be morphed back into their original colour by feeding them a bucket of milk.

Cats can be interacted with in a number of ways, such as by stroking them, showing them a ball of wool or wielding a mouse toy while the cat follows the player. Cats may be spoken to with a catspeak amulet, or without it after partial completion of Dragon Slayer II. They can also chase rats, with a successful catch rate depending on the type of cat. Regular adult cats have a success rate of 50%.

Similar to every pet, cats can be stored in the menagerie of a player-owned house. They however cannot be insured by Probita and will run off if the player dies, if they were either in the player's inventory or following the player.

Players can use their adult cats, including hellcats, on civilians in West Ardougne in the south-western area of the city to sell it to them for 100 death runes (18,400). This increases to 200 death runes (36,800) with the easy Ardougne achievement diary reward. Cats can also be shooed-away if the player no longer wishes to keep them.

When fighting Hell-Rat Behemoths, the King rat or in the Rat Pits, cats have the following combat stats:[1]