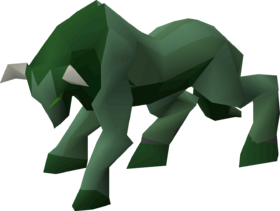 Catablepon are creatures that appear to be green bulls with reptilian tails. They are found on the third level of the Stronghold of Security. They drop the top of sceptre, one of four parts of the Skull sceptre.

They cast the magic spell Weaken (which appears as a spraying white sparkle) to drain your Strength, but will stop casting once 8% +3 of your total strength level has been drained.

Players are not advised to train on these with Melee, as Weaken can drain their Strength quite significantly, which will affect the player's experience rates in turn, unless Strength potions or Restore potions are used (you can also use the Protect from Magic prayer). They can use melee and magic attacks often and cast Weaken at the same time. After the spell has decreased 8% +3 of your Strength levels, catablepon will stop casting Weaken, but casts before this threshold can still bring you lower than the threshold. Ranged or Magic attacks are recommended instead of melee.

On the west side of north-western room, there is a ranged and mage safespot behind the "Stinking/Dripping tendrils" available. Walk into the western door and the westernmost tile behind the tendrils. Another safespot is in the same room. Enter from the western door and stand against the wall beside the door. Finally, another safespot is available in the room right before the central room. Standing in the north-westernmost corner of the room, it is possible to attack the catablepon from a distance. Level 64 catablepon give 70 Slayer experience per kill, while levels 68 and 49 give only 50 and 40 respectively, so to maxmise for Slayer experience, only kill level 64 catablepon on task.

Drop rates estimated based on 224,252 samples from the Drop Rate Project, unless otherwise cited.

There is a 3/101 chance of rolling the herb drop table.

There is a 1/101 chance of rolling the allotment seed drop table.

There is a 2/101 chance of rolling the gem drop table.