The Catacombs of Kourend is a massive dungeon located beneath Great Kourend. The main entrance is found by investigating the statue of King Rada I in the courtyard of Kourend Castle. The fastest way to the main entrance is through Xeric's talisman with the "Xeric's Heart" function, which teleports the player outside the statue of King Rada I, requiring completion of the Architectural Alliance miniquest, or the Kourend Castle Teleport spell, which requires finding and reading the book Transportation incantations from the Arceuus Library. Alternatively, a portal in the portal chamber or portal nexus of a player-owned house attuned to Kourend Castle can be used instead.

Catacombs of Kourend entrances - Must be unlocked by climbing up the vines from within the Catacombs.

There are five other entrances to the catacombs - three scattered around the surface of Great Kourend and two further entrances connecting to other dungeons on Great Kourend (Forthos Dungeon and Giants' Den, respectively). However, these additional entrances will only appear once the player has climbed the respective vines from inside the Catacombs. The vines connecting to the surface are located in the dungeon map to the right, marked with a

The Catacombs of Kourend were created by Skotizo during the God Wars by using an artefact stolen from the Karamjan Temple.[1] The Catacombs are said to belong in another realm,[2] while also being beneath the kingdom.[3] The Catacombs are also enchanted with powerful magic that prevents the monsters within from escaping;[4] conversely, it is supposedly difficult for "mere mortals" to enter the Catacombs as well, though players can enter the area without issues.

The Catacombs contains many monsters that are commonly assigned to players for Slayer tasks, and are slightly stronger compared to those found elsewhere on Gielinor. As this particular dungeon is a multicombat area (excluding the brutal dragon area), it is generally recommended to use Prayer or high-healing methods for aggressive high-level monsters stacked against the player. In addition, dwarf multicannons cannot be placed inside the Catacombs. If players attempt to place one, the chatbox will state "The influence of the dark altar prevents your cannon being set up here."

There are also a few agility shortcuts around the dungeon, the highest of them requiring 34 Agility. These shortcuts are found in the following areas:

There is a non-agilty shortcut:

The dark altar in the main entrance of the catacombs can be used to teleport to the four sections of the Catacombs; doing so requires using an ancient shard, which is obtained from monsters in the catacombs. 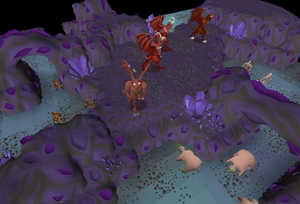 The Demon's Run is the north-eastern section of the Catacombs, where various demonic creatures can be found. The exit is found in the north-east corner with the greater demons, which leads up to the hole west of the dense essence mine.

Once the exit has been used—provided players have paid a one-off fee of 80,000 coins to Trossa—it can be quickly accessed via fairy ring cis and running east. 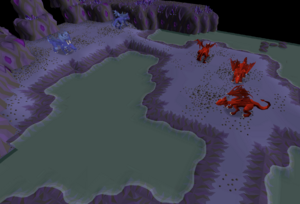 Once the exit has been used, it can be quickly accessed via the "Xeric's Inferno" Teleport on the Xeric's Talisman or the "Jewellery of Jubilation" teleport on Kharedst's memoirs, which requires completion of The Forsaken Tower to use. 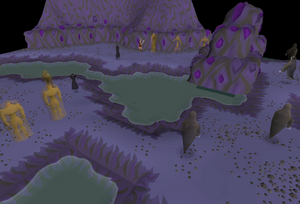 Once the exit has been used, it can be quickly accessed via fairy ring djr and running east. Note: deviant spectres at this entrance will lower your stats if not wearing a nose peg or slayer helmet. 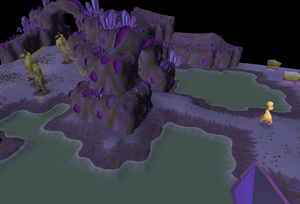 The Shallows is the watery south-eastern section of the Catacombs, where various undead creatures can be found. It is the only location where warped jellies can be found. The exit is found in the south-eastern corner with the king sand crab, which leads to the western exit of the Forthos Dungeon in Hosidius. This exit also happens to be very close to an altar. To use the altar you should unlock all the doors in the Forthos Dungeon.

Once the exit has been used, it can be quickly accessed via a variety of methods, such as using a Watson teleport and running to the Forthos Ruin, the Woodcutting Guild teleport from a skills necklace or travelling to the Hosidius station of the Lovakengj Minecart Network.

A player uses the dark totem on the Altar in the centre of the Catacombs.

Beneath the Catacombs lurks Skotizo, a demi-boss whose lair requires the use of a dark totem to enter. Components for the dark totem are obtained by killing the monsters (excluding ghosts) throughout the catacombs. To access the lair, the totem must be used on the altar in the centre of the Catacombs.