Catherby is a small fishing town located south-east of Camelot and west of White Wolf Mountain. It is a members-only town and is the ultimate "go to" town for fishermen of all levels due to the vast variety of fishing spots available on its shores. It is also a popular town for woodcutters due to the vast amount of trees to the west of the town.

To the east of Catherby is White Wolf Mountain. This area can be deadly to low-level players as level 25 and 38 aggressive white wolves inhabit this area. To the west of Catherby is Camelot and Seers' Village, and to the south-west is the mighty city of East Ardougne, the capital of Kandarin.

To the north of Catherby lies a large Farming patch, containing two allotments, one herb patch, and one flower patch. Standing nearby is, as usual, a handy tool leprechaun. Players can pay Dantaera, the nearby gardener, to watch over their crops for them or for Farming supplies.

Players who have completed the medium, hard, or elite levels of the Kandarin Diary will get a 5%, 10%, or 15% increase, respectively, to their Catherby herb patch yield. This stacks with the magic secateurs/Farming cape. Wearing the Kandarin headgear while harvesting is not required to gain the increased yield.

There is also a fruit tree patch located on the south-eastern beach near White Wolf Mountain, for growing fruit trees. Players can pay Ellena to watch over their fruit tree for them. 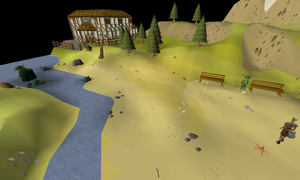 The famous sunny beaches of Catherby.

This place has a great variety of fish for players with 68 Fishing or lower. There are fishing spots where players can use small nets, fishing rods, big nets, harpoons, and lobster pots. This allows players to catch:

South of the Catherby fishing spots on the shore is another Agility shortcut. This shortcut allows you to grapple across from the Water Obelisk Island to the shores of Catherby. To use this shortcut you need a mith grapple and level 29 Ranged, level 36 Agility and level 22 Strength.

Near the fruit tree patch on the shores of Catherby is an Agility shortcut, which allows you to grapple up a small cliff. To use this shortcut you need a mith grapple and level 35 Ranged, level 32 Agility and level 35 Strength. You also need to have completed the Fishing Contest quest.

The houses of Catherby[edit | edit source]

In the small two-story house directly south of the farming patch is an insect repellent spawn. This is used during the Merlin's Crystal and Troll Romance quests. Upstairs in this house is a jug of wine spawn.

To the east of this house is another house. This house belongs to a man named Caleb. He is met during the Family Crest quest. Inside his house is a range and sink. There are also pie dish, burnt fish, jug of water, knife and bucket of water spawns in his house too.

To the east of Caleb's house is another house, containing three strange chests that are locked up in a cage.

There is a house to the east of the bank with a range. This range is often used as it is very close to the bank.

Monsters in and around Catherby[edit | edit source]

The charter ships also have a dock in the harbour at the south of Catherby. It provides rides to several other locations. After completing Cabin Fever, the charter ship fare is reduced by 50%. Wearing the ring of charos(a) also reduces the fare by 50%. These two bonuses can be stacked to reduce the cost to 25%.