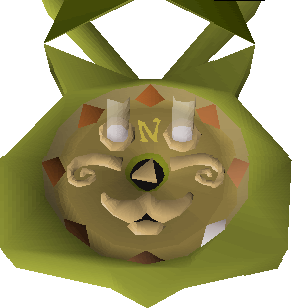 The amulet of catspeak pointing at Bob's direction.

The enchanted catspeak amulet is an amulet worn in the neck slot obtained during A Tail of Two Cats by handing over a regular catspeak amulet and 5 death runes to Hild in Burthorpe. Like the unenchanted version, you can speak to cats while wearing it. The main difference is that it can also be used to locate Bob the Jagex cat's general direction. To do so, right click the amulet, use the "Open" option which will open a compass-like interface in the shape of a cat, and turn the compass clockwise or anti-clockwise by clicking on the whiskers until the eyes are lit and the cat's mouth starts moving.

After the events of Dragon Slayer II, opening the amulet simply results in the message, "You look at the amulet and take a moment to remember your fallen friend."