From Old School RuneScape Wiki
Jump to navigation Jump to search
The RuneScape Wiki also has an article on: rsw:Cave crawler
This article is about the slayer monster. For the superior variant, see Chasm Crawler.

Cave crawlers are Slayer monsters that require level 10 Slayer to kill. They can inflict poison, so it is advised that players bring antipoison potions when fighting them. They are the only enemy to drop bronze boots. They also drop a variety of Herblore ingredients, which can be helpful for lower level players looking for an alternative source of herbs over more popular sources, such as Chaos druids. Lower level players should be aware that they have a high hit point regeneration, essentially every “0” damage ticks is a hit point regenerated. This can lead to being completely unable to kill the cave crawler.

While on a cave crawler slayer task, there is a 1/200 chance that a Chasm Crawler will spawn after you kill a cave crawler (if you have Bigger and Badder unlocked).

Players with very low Defence should use Ranged or Magic to attack these monsters in order to avoid being damaged and possibly poisoned, utilising the rocks around the room's walls in Fremennik Slayer Dungeon as safespots. When fighting cave crawlers in the Lumbridge Swamp Caves, be aware that any exposed light sources (i.e candles) may explode, and can cause a considerable amount of damage. As such, a bullseye lantern or an oil lantern is recommended as it is not an exposed light source. You can use the fairy ring just outside as a fast means of banking.

As mentioned above, players are advised to bring antipoison potions as cave crawlers have a chance to poison you when they hit. They also drop the ingredients to make them yourself. Note that it is recommended to use antidote++, as it lasts for 12 minutes for each dose. A cheaper alternative is Superantipoison, lasting for 6 minutes.

Much like banshees, cave crawlers regenerate their health back quickly, gaining back 1 hitpoint after every attack.

Despite resembling lizards, killing them does not count towards "slay lizards" Slayer tasks. 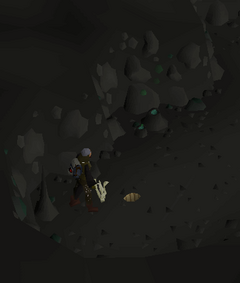 There is a range/mage safespot in the Lumbridge caves in-between a stalactite and a gas hole.

Assuming the player has the required Herblore levels, the various drops from Cave Crawlers can also be used to easily make the following potions.

Making these potions or even collecting the herbs dropped can be beneficial for those doing long Cave Crawler slayer tasks and/or earn some extra money whilst completing them. In addition, as the Cave Crawler can deal poison damage, making Antipoison potions with the items dropped can be extremely helpful.

Drop rates estimated based on 80,500 kills from the Drop Rate Project, unless otherwise cited.

There is a 26/128 chance of rolling the allotment seed drop table.