From Old School RuneScape Wiki
Jump to navigation Jump to search
The RuneScape Wiki also has an article on: rsw:Cave horror
This article is about the slayer monster. For the superior variant, see Cave abomination.

Cave horrors are Slayer monsters found in the Mos Le'Harmless Cave. Killing them requires the completion of Cabin Fever, level 58 Slayer, a witchwood icon, and a light source (unless a fire of eternal light is lit). They are most often killed for their black mask drops along with a decent rate of hard clue scrolls.

The cave horrors have a special attack which always deals damage equal to 10% of the player's base Hitpoints level, rounded down (for example 9 damage at 96 Hitpoints). This attack can be completely nullified by either wearing a witchwood icon OR by having Protect from Melee activated. Using protection prayers allows players to use more powerful necklaces instead of the witchwood icon as it only provides minor bonuses. This special attack also has a strange effect of being an Area-of-Effect (AoE) attack in a single-way combat area, hitting any players stood next to the Cave horror not already in combat with it. Another strategy is to use safespots, but players should take caution leaving their safespot to loot, as the aggressive cave horrors may attack you. For this reason, if you do not have access to Protect from Melee, it is still recommended to bring the witchwood icon.

Killing a cave horror is a task in the Hard Morytania Diary.

To get there, players may do any of the following:

When fighting cave horrors, players will need to either use Protect from Melee to negate all damage, or wear a witchwood icon and armour that provides high Magic Defence bonus (such as dragonhide armour) against their special and Magic-based Melee attacks. Wearing a witchwood icon is necessary if not using Protect from Melee, as otherwise players will take heavy damage from the special attacks over time. 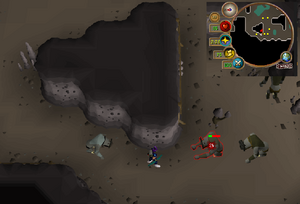 One of the safespots located in the first room of the Mos Le'Harmless cave. Occasionally, some cave horrors will wander into the safe zone if ranged from an angle. A witchwood icon is advised as backup.

Cave horrors have fairly low Hitpoints, and they are relatively spread apart, so it is generally best to use a fast-firing Ranged weapon like a toxic blowpipe, magic shortbow (i) or Karil's crossbow. If using Melee, it is recommended to use equipment that provides high Prayer bonus (such as Proselyte armour) and always use Protect from Melee so a better amulet can be used. A dwarf multicannon can also be used to speed up kills. Cave horrors can alternatively be safespotted by using the mushrooms, stalagmites, and boulders inside the cave, such as the area by the swamp near the cave entrance.

When cannoning, consider using a bonecrusher necklace, which will comfortably maintain Protect from Melee without using any supplies, as the Cave Horrors drop Big Bones.

Consider bringing a plank sack with Plank Make, to convert the unnoted Mahogany logs they frequently drop into planks and store them in a single inventory slot.

Switching to the Arceuus Spellbook and bringing runes for casting Adept Reanimation should also be considered for passive prayer training as ensouled horror heads are frequently dropped.

Note: It is advisable to keep the witchwood icon in case of a close combat encounter if safespotting, or in case you run out of Prayer points.

Drop rates estimated based on 332,479 kills from the Drop Rate Project, unless otherwise cited.