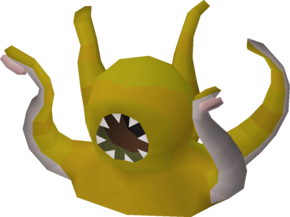 Cave kraken are slayer monsters that are found in the Kraken Cove. They can only be attacked if players have them as a Slayer task. To be assigned cave krakens, players require level 87 Slayer and 50 Magic.

These monsters, along with their boss variant, are the only monsters to drop the Kraken tentacle and the Trident of the seas.

In order to attack a cave kraken, a player must disturb a whirlpool, causing the cave kraken to surface. Magic is the only reliable way of dealing damage to them, as Ranged attacks are heavily reduced, and Melee cannot be used. Their projectile resembles Water Wave and can be protected against by the Prayer "Protect from Magic" or having a high Magic Defence.

It's generally not recommended to kill cave krakens as they have very poor drops that will not cover the cost of runes, and the boss is significantly easier with a more generous drop table. However, an exception can be made for ironmen players due to their more common uncharged trident drop.

A player disturbs a whirlpool, causing the cave kraken to surface.

Drop rates estimated based on 470,800 kills from the Drop Rate Project, unless otherwise cited.

There is a 6/200 chance of rolling the herb drop table.

There is a 6/200 chance of rolling the rare seed drop table.

There is a 6/200 chance of rolling the gem drop table.