Cerberus is a level 318 hellhound boss that is located in her lair, deep beneath the Taverley Dungeon in the cave entrance in the north-east part of the hellhound area which is found beyond the poisonous spiders. Cerberus requires a Slayer level of 91, along with a task of hellhounds or Cerberus herself. In the event of the hellhound or elite clue scroll task, wild pies may be used to boost the player's Slayer level.

As the Guardian of the River of Souls, Cerberus protects the souls of the departed from whatever troubles they may face on their journey by the people of Arceuus. Despite her important task, Cerberus longs to escape her post, and has successfully done so on multiple occasions, although with each attempt she was quickly captured and returned. Cerberus has killed many adventurers who have stumbled into her lair, with one of her more recent kills dropping a damaged soul bearer which the Arceuus Elders inspected and eventually discarded when they could not repair it.

Cerberus drops three different crystals: the eternal, pegasian and primordial crystals which are used to upgrade infinity, ranger and dragon boots to the eternal, pegasian and primordial boots respectively, the best-in-slot boots for their respective combat styles. She can also drop the smouldering stone at a much better rate compared to her lesser brethren, along with the jar of souls and the hellpuppy pet.

A dwarf multicannon cannot be set up inside Cerberus' Lair; if attempted, you will receive the message: You cannot place the cannon here, it would melt.

Cerberus has three special attacks that she may use under certain circumstances:

If a player has recently fought the boss, a line of fire will spawn between the entrance and the boss; stepping over this will deal 5 damage each way. The line of fire may be bugged, as it will not despawn unless the challenger dies to Cerberus or goes back through the line of fire after it respawns and if the challenger comes back after teleporting away mid-fight. Cerberus will restore all of its health if there are no players in its lair (it only has an examine option when this happens).

Once defeated, Cerberus will respawn in five seconds.

Drop rates estimated based on 93,825 kills from the Drop Rate Project, unless otherwise cited.

There is a 1 in 128 chance of hitting the unique drop table. Below lists the effective drop rates.[1] 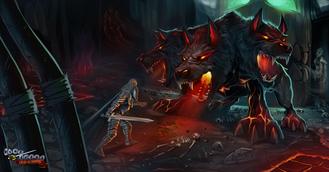 A piece of artwork depicting a player facing Cerberus. 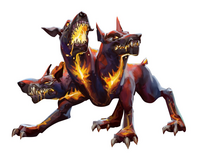