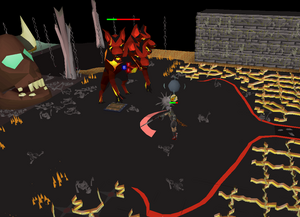 A player takes on Cerberus in her lair.

Cerberus is a high level Slayer boss. A Slayer level of 91 is required to inflict damage and a slayer task of Cerberus or hellhounds. Wild pies can be used to boost the player's Slayer level, but only if they have a minimum of 86 Slayer.

It is the only monster to drop primordial, eternal and pegasian crystals, which can be attached to the Dragon boots, Infinity boots and Ranger boots respectively, providing best-in-slot boots for Melee (the Primordial boots), Magic (the Eternal boots), and Ranged (Pegasian boots).

In addition, it is also able to drop a Smouldering stone, which when combined with a dragon axe, pickaxe or harpoon to turn them into their respective infernal counterparts; the infernal axe, pickaxe and harpoon. 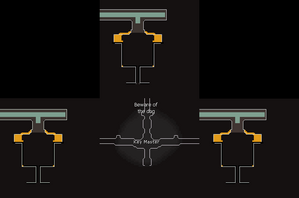 A map of Cerberus' Lair

Cerberus' Lair can be found in Taverley Dungeon, at the hellhounds' area. There will be a small opening that players can crawl into to enter the lair.

Effective ways to get to Taverley Dungeon include teleporting to Falador and using the wall shortcut near the West bank, only a short run from the dungeon entrance, or moving one's Player-owned house to Taverley, exiting via the house portal and running south.

There are two ways of navigating the dungeon:

Cerberus attacks with all three forms of combat:

A player switching the correct prayers against the Summoned Souls.

Note: As of the patch notes of 16 March 2017, if Cerberus is killed when the spirits are summoned, they will despawn upon attempting to attack the player. Note that any spirits that attack just as she dies will still damage the player, so pray accordingly if this happens.

Cerberus has a special attack pattern that determines how she uses her attacks.

As mentioned in each attack section, Cerberus' mechanics are initiated after the following, quickly summarized here:

If the attacks end up overlapping with each other (e.g a triple attack and summoned souls on attack #21), Cerberus will instead prioritize the attacks in the following order:

There is also a small chance that Cerberus will not use the summoned souls or lava pools special attacks when she is supposed to, and will use a regular attack instead.

While fighting Cerberus, it is recommended to activate Protect from Magic.

For the most kills per hour, the player should be on the Arceuus spellbook for thralls and bring a book of the dead. If using melee, you can optionally bring soul and death runes for Death Charge, though this is 2 fewer inventory spaces for supplies. Otherwise, no spells are needed and you do not need to bring any runes. If you are suiciding supplies into the room for longer trips, bring alch runes.

As a hellhound-type boss, Cerberus has high offensive stats (220) but has a low Defence level (100). She is weak to melee attacks, primarily crush-based ones. She is slightly resistant to stab attacks and resistant against slash, magic and ranged attacks. As a demonic creature, she is weak to Arclight, which should be set to stab if it is used. Despite her resistance to ranged, ranged weapons can still be extremely effective against her, in particular the twisted bow.

Upon spawning, Cerberus cannot be attacked; rather, she only has an examine option as she is sitting. Once she detects a player in the arena, she will stand up to confront the intruder and become attackable. If no players are present inside, she will return to the centre of her chamber and her attack option will be removed, which will also restore all of her health if damaged.

It is recommended to deal damage as quickly as possible while taking note of Cerberus' attacks. The most common cause of death is the lava pool and soul combo, regardless of which one comes first. For example, during attacks 14 and 15, Cerberus will summon souls first, then follow up this attack with lava pools. The pools usually disorient players as they try to avoid them and eat up, forgetting about the souls who can deal heavy or fatal damage in the process. Simply count Cerberus' attacks and deal with the spirits as highest priority. Ranged users usually have an advantage over melee users since the targeted pool is not applied on the same tick Cerberus initiates the mechanic, giving them more time to move away from the pool and granting their full attention to the incoming souls. Melee users will simply need to count the attacks and try to avoid running into any other pools in place.

A slower but less resource intensive strategy (particularly for ironmen who wish to conserve supplies, or hardcore ironmen who want to avoid dealing with the lava pools and ghosts at once), the player can hit Cerberus to just above 400 hitpoints and wait until the 14th attack (~56 seconds) which ensures no ghosts will appear until the 28th attack. This will reduce prayer potion usage to about two doses per kill if prayer flicking is used while waiting for the 14th attack. It is recommended to put on defensive gear, such as a Dinh's bulwark, and step away from Cerberus while waiting for the 14th attack to minimise damage taken while waiting. If you make a mistake and bring Cerberus' health below 400 before attack #14, you can safely reset the fight by walking back over the entrance flames.

Here is a summary of Cerberus' attacks leading up to Attack 28. You can practice this rotation by counting from the checkpoint special attacks (Combo, Lava, & Ghost attacks). For example, you want to keep Cerberus above 400 hitpoints until attack #14, so start counting 3 attacks after her second combo before resuming damage. Note that the soul and lava mechanics on attacks 25 and 28 are still conditional based on Cerberus's hitpoints, but you will struggle to end the fight before souls if Cerberus still has over 200 HP at attack 25.

With Rigour, ranging is generally faster and safer than melee. As she possesses a Magic level of 220, the Twisted bow can be used on her with devastating effect. Cerberus does not move in to attack players with melee, meaning that players are only subjected to magic and ranged attacks outside of the triple attack mechanic. Ranging also allows players to quickly avoid the lava marker attack since it does not appear instantly when launched at a distance. The Bow of Faerdhinen is also effective, but slightly worse than the Toxic blowpipe if using rune darts or better. Crystal armour should be worn if using the Bow of Faerdhinen.