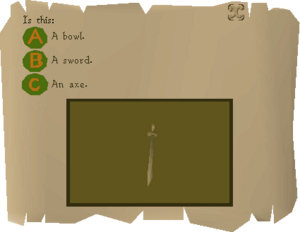 An example of question asked by the Certers.

The Certer is a random event in which the player is asked to identify an object by one of the certer brothers, Niles, Miles, or Giles. An object is presented with three possible choices. If the player correctly identifies the item, the certer brother will give the player a reward such as an uncut ruby, sapphire, emerald, or diamond, or even a Loop half of key or Tooth half of key.

Drop rates estimated based on 5,819 rewards from the Drop Rate Project, unless otherwise cited.

In RuneScape Classic, certers ran exchange stalls around RuneScape converting various items into certificates ("certs" for short) for large quantity trading. The certs were similar to the present-day bank notes, being stackable, except five items traded for one certificate. Because certs were only available from certers, many trips had to be made from the bank to the certers to exchange items for notes or notes for items, which was tedious.

When RuneScape 2 was released, the certers were removed from the game and replaced with the bank note system. Existing certificates were all converted into bank notes. Niles, Giles and Miles were soon re-released as this random event, in reference to their old role as certers, but the other certers were not.

Before the random event rework, the certer gave the player four warnings. If the player still ignored him, he teleported the player to a random, relatively safe place and turned their inventory and equipment into bank notes. Some players considered this very annoying during combat. After the rework, there was no longer a penalty for ignoring the certer.