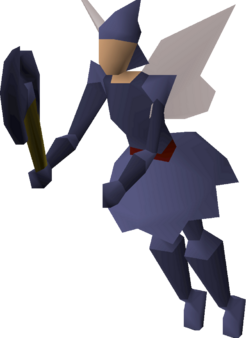 Chaeldar is the fourth most-advanced slayer master in RuneScape. She is found in the throne room of Zanaris, directly south of the entrance from the Lumbridge Swamp, meaning completion of the Lost City quest is required to reach her. She gives out mid to high level Slayer tasks, which may only be attempted by players with a combat level of at least 70.

Unlike Mazchna and Vannaka none of her tasks require the player to kill Wilderness-only monsters (such as Earth warriors).

Players can receive Slayer reward points for completing Slayer assignments—this is based on how many tasks players have accomplished in a row. Completion of a task assigned by Chaeldar will grant you:

The Fairy ring network is a useful method of doing Chaeldar's Slayer tasks. It has teleport spots close to the Slayer Tower (CKS), the Fremennik Slayer Dungeon (AJR), and other locations to be reached easily for no cost to the player, all of which contain the slayer monsters that she assigns and can be easily reached from the fairy ring in Zanaris.