The Chambers of Xeric is a large cave system underneath Mount Quidamortem, built by Xeric in the Kebos Lowlands. Released on 5 January 2017, it is the first raid released in Old School RuneScape. 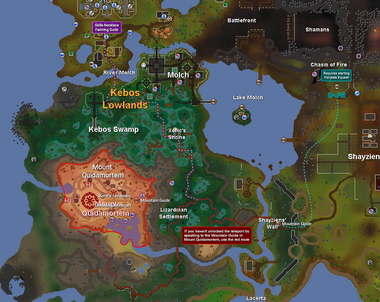 The Chambers of Xeric are located on Mount Quidamortem, which can be quickly accessed via the Lovakengj Minecart Network. This will require the player to bring a minecart control scroll from Miriam and bring it to Stuliette on the mountain. Doing so requires the player to have earned 65% Lovakengj favour.

Otherwise, players will need to head to the Shayziens' Wall and make their way west to Mount Quidamortem; be wary of aggressive lizardmen and lizardmen brutes. For those arriving there without the mine cart system, speak to the Mountain Guide (who is located on the mountain next to Gnosi, Historian Duffy, and the Natural Historian) before leaving; doing so will establish a two-way transportation system between the mountain and the Shayziens' Wall.

Once players receive an ancient tablet as a reward from the Chambers of Xeric, they are able to use it on Xeric's talisman to instantly teleport to the mountain.

The Chambers of Xeric uses a unique party finding system to help determine how strong the team is. This will affect the strength of the monsters and bosses, in addition to the requirements needed in the skilling rooms. Players can bring their own supplies in (tools not needed), but will need to utilise the chambers' resources in order to defeat the increasingly strong bosses. Any number of players from 1 to 100 may start a raid.

To start a raid, the leader must create a team. This "team" is the leader's Clan Chat; which other players may join by manually typing in the clan chat's name or by requesting to join the chat. Once everyone is ready, the leader should enter the chambers, where a starting room is located. The raid officially starts once the leader confirms that everyone is in the room; when that happens, all the mechanics will be calculated and no one may join the instance if they were not in by the time the raid started. If the leader leaves by any means, the next leader will be whoever has the highest rank in the Clan Chat, with a minimum rank of recruit; if no suitable rank is found, everyone is thrown out of the instance.

There are multiple demi-bosses/resource/puzzle rooms, and a final boss in every raid. There are three floors in each raid; the final floor is always the same, housing the final boss. At the end of the first and second floors is an energy well that fully replenishes the players' energy when interacted with.

Communication and teamwork is needed for players to defeat the bosses and complete the raid.

Challenge Mode is a "hard" version of the existing Chambers of Xeric. All combat and puzzle rooms are featured, and the enemies themselves have significantly increased stats. The layout is always linear, and has four floors due to all combat/puzzle rooms being featured.

Completion of the mode can yield metamorphic dust to reskin an olmlet, a twisted ancestral colour kit to recolour ancestral robes, and a cosmetic cape.

Scavenger beasts can be found around the dungeon. One scavenger room is always guaranteed somewhere in the raid, and it will always be before the first puzzle room. It is common to encounter one scavenger room on each floor, though in uncommon and circumstances players may encounter two scavenger rooms on the floor. They are killed for tool and herblore secondary drops, which are used in the resource rooms, such as butterfly nets and cave worms.

The scavengers encountered are random, in addition to the room type they appear in - some rooms may be a small bend or curve, others a spacious area (which will always contain a boulder, mining rock or sapling shortcut which can be cleared away for points). The amount of scavengers in the room, along with their strength (to a very mild degree) is determined by the amount of players in the raid.

If the player dies in the Chambers, they will drop all raid-only items upon death; for example, if the player died with 10 Xeric's aid (+), those potions are dropped immediately upon dying. Other items that can be found, such as a hammer, will not be dropped upon death.

All these cooking resources require the same level for hunting or fishing them. They are not often utilized in normal raids due to Xeric's aid providing more healing per inventory space.

To catch bats, a butterfly net is required.

To catch fish, a fishing rod is required, with cave worms as bait. In fishing rooms, there are three fishing spots. One of these three spots contains a cave snake, which will damage the player (or take their fish). If a snake appears in the fishing spot, stop fishing and click elsewhere to avoid taking damage. Only spots containing plain fish and cave snakes will move occasionally.

All the items required to capture bats and fish can be dropped by scavengers.

In resource rooms without fishing spots, there will be two to three bats flying around in the chamber, which can be caught and cooked for food. Players with 99 Hunter can catch any bats barehanded.

Seeds can be obtained from several bosses, such as the Skeletal mystics, Lizardmen shamans, and Guardian statues. They can also be found by raking weeds in the top and lower floors (the last area in those floors and the first area in the lower floor).

There are two farming plots in each resource room for players to grow herbs. Due to the magic of the chambers, herbs grow faster and are fully grown in 30 seconds.

Potions can be dropped in small amounts by the bosses, though this should not be relied on to obtain them. Scavenger beasts drop Herblore secondaries.

There are three types of potions a player can make:

To create potions in the chambers, a gourd must be collected from the nearby gourd tree, then filled with water from the nearby water spout, or with Humidify. Gourds can be picked en masse with the "Pick-lots" option. Gourds automatically break upon drinking the last dose of the potion.

Note: Overload tier is capped based on your Herblore level and potions being used. For example, you cannot make Overload(+) without having 90 Herblore and Elder(+), Twisted(+), and Kodai(+) potions. If you have those potions but only have 75 Herblore, the combat(+) potions will downgrade one tier to create a normal Overload.

Standard potions have the effects of their super variants outside (e.g the Overload is exactly the same as the one in Nightmare Zone).

Storage units are built from mallignum root planks, obtained as drops from scavengers. A hammer is required in building storage units, with the dragon warhammer being a suitable substitute.

Once a storage unit is built, anyone can use it. Storage units have a shared and personal inventory. The shared inventory allows players to store items used in the raid, such as the tools, seeds, herbs, Herblore secondaries, and potions. The personal inventory is much like the shared inventory, but it can also hold the player's belongings, such as weapons and armour. The player can also put in raid-unique items in there if desired. In addition to this, once a storage unit is built anywhere in the Chambers, they will appear in all potential hotspots where they may be found.

Storage units can be found at the end of each floor, in addition to appearing in resource rooms, the corrupted scavenger, and ice demon chambers.

While higher levelled storage units can be built immediately, they still require the materials to build the previous tiers. So in order to build a large storage unit instantly, you need 6 planks (4 for the first two storage units, then 2 for the remaining upgrade). 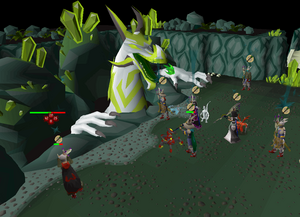 Player rewards are based on "participation" points. As the team collects more points, they have an increased chance of obtaining unique items. Individually, these points determine the quantity of common rewards. If a player dies in a raid, they will lose 40% of the points that they had before their death. If the player dies with no, or extremely few, personal points, the team's overall points are reduced instead.

The current maximum amount of points attainable per player is 131,071 points.

If a member of a raid party leaves early, the points multiplier and difficulty for that raid will remain the same.

Gaining points in raids is possible in multiple ways, all of which have a cap which scales to the number of players in the raid. Below is a short description for all ways to gain points within the Chambers of Xeric.

Dealing damage within the Chambers of Xeric will reward the player with points based on damage dealt.

Building or upgrading the Storage unit will give 100 points per tier.

In some scavenger rooms, a shortcut which requires Mining, Woodcutting, or Strength to clear can be found. Clearing this shortcut rewards the player with some points.

In the Muttadile room, there is a meat tree. Cutting this tree awards some points.

When a player steps between the Guardians, they will push the player away, dealing damage and awarding some points.

Appropriate use of potions that the player makes will award some points to the player that made them or got them from one of the bosses. More points are given if a player other than the one who created the potion drinks them. Overloads award the highest amount of points, so players should try to refrain from drinking other potions during the raid, as the point cap for potions is based on doses drunk, not points gained. 75 herblore for overload, 90 herblore for overload+.

In the Jewelled Crab room, being targeted by one of the crabs used to bounce the floating crystal towards the static crystal will reward some points.

When a player deposits kindling in the braziers in the Ice demon room, they are rewarded with points.

When a player fills the trough with cave worms in the Thieving room, they are awarded a certain amount of points.

When a player uses the keystone crystal on the barrier in the tightrope room, some points are awarded.

Regardless of whether a unique drop was obtained, players may always additionally obtain the dark journal if they do not have it already, and the metamorphic dust/twisted ancestral colour kit for players completing a challenge mode raid.

Upon the Great Olm's death, if a unique reward item is given, it will be announced in the game chat.

In groups of all sizes, a weighting system is added when a unique loot is rolled, based on the players' points. For example, a player who has 90,000 points is twice as likely to obtain a unique reward compared to a player with 45,000 points.

Accessing this table is required in order to be eligible for Olmlet. 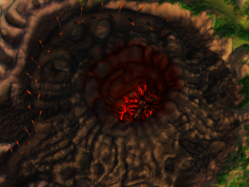 A concept art of the Paradigm of Exodus, a raid whose concept was later reshaped into the Chambers of Xeric.