The Champions' Guild is located south of Varrock and is accessible to players with at least 32 quest points. It has Scavvo's Rune Store and Valaine's Shop of Champions, and is also the starting point of the free-to-play quest, Dragon Slayer I.

The Guildmaster welcomes players that enter the guild. He is the starting point of the hardest free-to-play quest, Dragon Slayer I. The main room has stairs to the 1st floor[UK]2nd floor[US] and a trapdoor that leads to the basement. The southern room has a range.

The ground floor[UK]1st floor[US] contains two rooms and a small outdoor area with chickens. Among the chickens there is a level 159 Evil Chicken which gives reduced experience and does not count towards the Recipe for Disaster: Sir Amik Varze subquest. 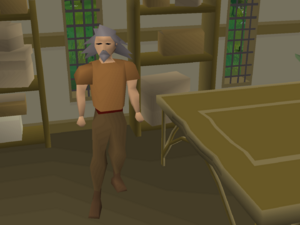 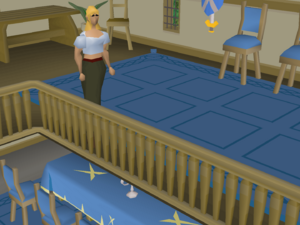 Valaine walks around the north side of the room and runs Valaine's Shop of Champions, a general store allowing any item to be sold there. Valaine sells blue capes, black full helms, black platelegs, and adamant platebodies. She has the only shop that sells adamant platebodies in free-to-play.