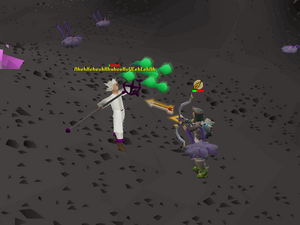 A player faces the Chaos Fanatic.

The Chaos Fanatic is a relatively simple boss, but a simple mistake can cause some damage to you with his special attack.

Due to his high magic level and defensive bonuses, the most effective way is to use Ranged while protecting from magic and avoiding his green special attack.

Players can also walk to the altar south-west to recharge their prayer after each fight.

Activate Protect from Magic, and be prepared to use Protect Item if 4-iteming. Similar to the Chaos Elemental, he can unequip your items. Always watch out for his green magical attack, and be ready to move. World hop between kills to avoid player killers.

If you are using potions, it is advised to make sure that vial smashing is turned off if you have previously turned it on by speaking to the Barbarian guard at either the Barbarian Outpost or through the NPC Contact spell, or the smashing of the vial will allow the Chaos Fanatic to unequip your items.

Note that Ava's devices can be lost on death in Wilderness above level 20, so the assembler should only be brought if it is a protected item or can be replaced easily.