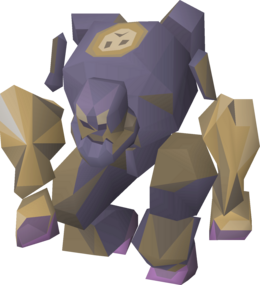 The Chaos Golem is one of the golems found in the Ruins of Camdozaal. It can be found by awakening the Rubble lying in the far south-east section of Camdozaal, south of the body golems.

When you walk far away from an awakened golem without killing it, it will disintegrate as if it died, without dropping any loot.

It is possible to safespot the golems using Magic, Ranged, or a halberd. To safespot the golem, awaken the golem north of the player in the first picture. As soon as you can, run south to the tile marked with the red "X". This works as the golem always aligns their left side with you. Another spot is the south-east golem, shown in the second picture. Wake them up and run to the east 2 tiles.

Drop rates estimated based on 517,000 kills from the Drop Rate Project, unless otherwise cited.